The decision will be taken only if the order comes from the Chief Minister’s Office: Minister Anbil Mahesh Poyamozhi

When asked about the corona virus at the time, he said that so far no notification has been issued by the Chief Minister’s Office regarding the corona virus infection.
If so, restrictions will be imposed accordingly.

The Kodanadu estate murder and robbery case is being investigated not only in Tamil Nadu but also in neighboring states like Kerala and Karnataka. Therefore, the Government of Tamil Nadu requested for more time to conduct the trial.

Judge Sreedhar accepted the request and adjourned the case till July 29.

The Tamil Nadu government has set aside Rs 1 crore for chess matches for government school students.

The Chennai High Court has stayed the police probe against Utopian Karthik Gopinath for allegedly extorting money from the public in the name of temple restoration. The Chennai High Court has ordered that not only disciplinary action but also criminal action be taken against the police bribing.

16:15 PM
Chennai High Court orders plan to recall Tasmac bottles across the Nilgiris across the state

Nagai: The book festival has started

Books from 110 publications, including Judicial Porridge, are piled high in the arena. Crowds of people flocked to view the piles of books.

15:00 PM
Following the Nilgiris, the Chennai High Court has directed the management of Tasmag to submit a plan for the recall of empty liquor bottles across the state by July 15. 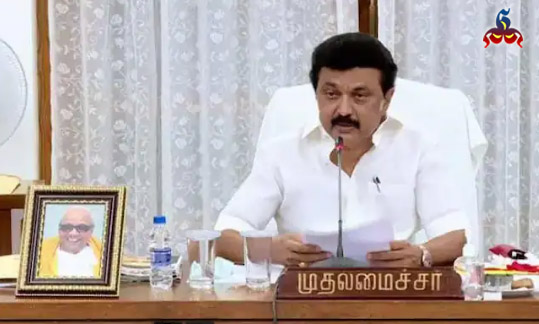 Chief Minister MK Stalin will inaugurate the ‘College Dream’ program tomorrow, June 25, at the Chennai Nehru Indoor Stadium, which will guide higher education to Class 12 students under the ‘I am the first’ program.

14:45 PM
Only spirit products should be sold in spirit stores

The Dairy Minister has warned that only Aavin products should be sold in Aavin shops and the ownership of the shop will be revoked if other products are sold.

14:30 PM
Only Treasurer of the OBS AIADMK: CV Shanmugam

CV Shanmugam has said that O Panneer Selvam is only the treasurer of the AIADMK and he is not the coordinator of the party.

14:15 PM
Increase in the price of fed potatoes

OPS name and picture have been removed from Villupuram district AIADMK office and wall advertisements.

Uma Ramanan, one of the Eelam Tamils ​​who had gone on a hunger strike at a special camp in the Trichy Central Jail, has taken a bath today, demanding his release. Authorities immediately rescued him and sent him to Trichy Government Hospital for treatment.

12:30 PM
The trial in the Kodanadu case has been adjourned till the 29th

11:45 AM
Security for Yashwant Sinha

Yashwant Sinha, the opposition presidential candidate, has been given Z-section protection by the federal government

The Chennai High Court has dismissed the bail plea of ​​actress Meera Mithun in a case filed against her for spreading slander and audio recording about Chief Minister Stalin.

EPS is in consultation with his supporters Pollachi Jayaraman, Vaigaichelvan and Thangamani at his Chennai home. KC Veeramani, P. Valarmati and KP Anpalagan also participated in the consultation.

While the OBS has sought the Election Commission, the EPS has been conducting intensive consultations. Udayanithi Stalin is playing the role of Mamannan in the upcoming film directed by Mari Selvaraj. The 2nd phase shooting of this film has been completed.

General Murmu sought the support of the AIADMK

President Murmu, who has been declared the presidential candidate, met Thampidurai at his residence in Delhi and rallied support.

AIADMK co-ordinator O. Panneerselvam has filed a petition at the Election Commission in Delhi protesting against the holding of the AIADMK general body on July 11.

Minister Ma Subramaniam has stated that there are no new corona restrictions in Tamil Nadu. Are there any signs of corona when sending children to school? As advised by parents.

Employees of the State Transport Corporation in Pondicherry have been on strike for the second day in a row without operating buses.

The Government of Tamil Nadu has reduced the retirement age for the disabled from 50 to 40 years.

The Department of Transportation has ordered drivers to park their buses at appropriate bus stops.