Lyca Productions made the official announcement regarding the most-awaited sequel ‘Chandramukhi 2’ last month.

Raghava Lawrence has announced ‘Chandramukhi 2’, and the film was officially launched a few weeks back. Trisha was said to be playing the female lead.

However, the recent report suggests that Lakshmi Menon will play the female lead in ‘Chandramukhi 2’.

The makers of ‘Chandramukhi 2’ couldn’t rope in Trisha as the female lead due to some reasons, and they have found another tall actress to play the leading lady.

Lakshmi Menon will also be the better option since the actress hasn’t done a horror film yet.

It will be the second installment of Superstar Rajinikanth’s ‘Chandramukhi’. Director P Vasu is set to helm the sequel as well starring Raghava Lawrence and Vadivelu.

Subaskaran of Lyca Productions is funding the project, which has music by M.M. Keeravani aka Maragathamani with R.D. Rajasekhar handles the camera and Thotta Tharani takes care of the production design.

However, the recent report suggests that Lakshmi Menon will play the female lead in ‘Chandramukhi 2’. The official announcement regarding the actress’s participation will be made soon.

The first schedule of the film’s shooting will be commencing next week on July 15 in Mysore, and the schedule will last for 30 days.

The next details about the film’s shoot haven’t been planned yet, and it will be sketched once the first schedule nears completion.

Raghava Lawrence has joined hands with director Vasu for ‘Chandramukhi 2’, a sequel to Rajinikanth’s mega-hit film that was released in 2006. 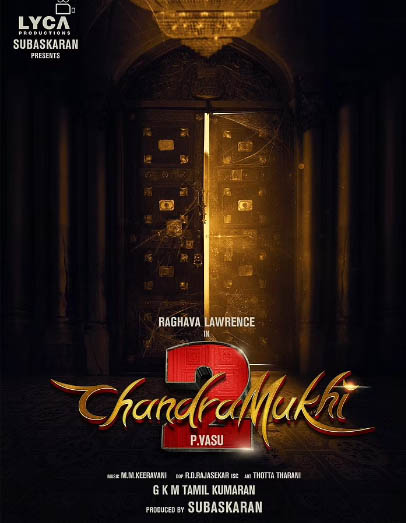 Vadivelu, who played a comic role in ‘Chandramukhi’ is also part of the sequel, while the film’s music will be scored by MM Keeravani.

Chandramukhi was screened in Tokyo in October 2005 to packed houses. Chandramukhi completed a 100-day theatrical run in South Africa.

It collectively earned ₹43 million in Malaysia, UAE and the US during the first month of its theatrical run.

The film collected ₹62.78 million (US$1.4 million in 2005) in Malaysia; it was the only Indian film to feature in that country’s top ten grossing films of the year. Chandramukhi grossed ₹8.4 million in 11 days in eight screens in Chennai. In the Santham screen of Sathyam Cinemas, around 22,000 tickets were sold for the first 10 days of its release.

It was also a hit in Kerala where it grossed ₹711,545 in four days, doing better than the Mohanlal starrer Chandrolsavam, which also released on 14 April 2005, but grossed ₹523,340 during the same period of time.

The film’s theatrical run lasted 890 days at Shanthi Theatre, beating the 62-year record set by the 1944 film Haridas, which ran for 784 days at the Broadway theatre, also in Chennai.

According to Krishna Gopalan of Business Today, the film grossed ₹750 million (US$16.6 million in 2005) in its lifetime run.

It was the longest running South Indian film, until surpassed by the Telugu film Magadheera (2009), which completed a theatrical run of 1000 days in April 2012.