Not only Tamilnadu but also people from outside the state know about the marriage blessing temple.

This ancient temple still exists today with sanctity and fame.

Not only Tamilnadu but also people from outside the state know about the marriage blessing temple.

This ancient temple still exists today with sanctity and fame.

A temple-wedding ceremony per day
Marriage Cheri means the town where the marriage took place.

That is, this is the land full of divine power where the marriage of Lord Shiva and Goddess Parvati took place. Kannika was donated by Srima Vishnu.

It is believed that Shiva – Parvati, Vishnu – Lakshmi reside there after this divine marriage!

This is a place of pride and honor. To the east is the Kaviriyaru called Vikraman, and to the west is the tributary Kali Vaikkal.

The temple situated between the two is the wedding hall. Parvati was cursed to be born as a cow on earth.

When the cow Parvati Devi came here, Vishnu also came with her as herdsman.

Parvati married Lord Shiva after getting rid of the curse. Then Vishnu made Parvati a virgin by pouring water on Shiva

SriBrahma, the ninth, conducted the marriage ceremony of Shiva Parvati from the seat of the priest. 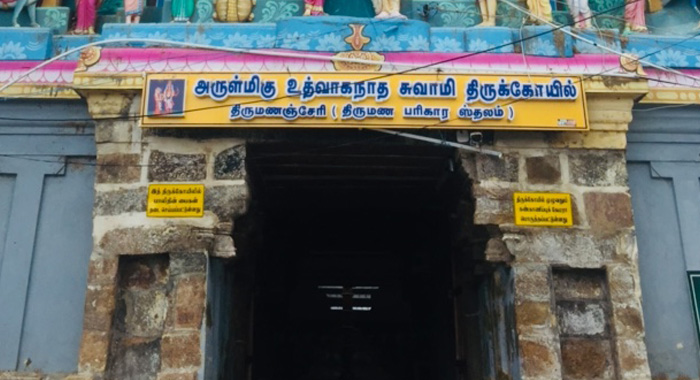 At the Madurai Meenakshi Sundareswarar Temple, this wedding scene can be seen as a sculpture on a pillar!

Lord Shiva’s name here is Kalyana Sundareswarar as he got married in Vidhancheri. Utsava’s name is Udhwaga Natha Swami.

Ambikai Gokilampal. Srilakshmi Narayana is the name of Vishnu’s brother-in-law who conducted it.

Sridevi, Bhudevi. The holy name of the Utsava is Srivaradaraja Perumal.

About 200 meters away from the Shiva temple is the Melet Vishwancheri. It was there that Vishnu welcomed all the thirty three crore gods who had come for the wedding.

Hence it came to be known as திதிப்புட்டி. The most important festival in Kalyana Sundareswarar temple is his Thirukalyanam.

Even today, processions of seers for that Thirukalyanam are carried from the front porch where Lakshmi Narayana Perumal resides.

Unusually, Perumal is facing west in this town. There is a reason for that.

Kalyanasundar and Kokilambal sat facing east for the wedding, while Mahavishnu, the brother-in-law who conducted it, sat facing west.

Here he does not carry Lakshmi by his side or on his chest. Tathumpak presents a beautiful scene with the Golam carrying the mother on his lap.

The wedding ceremony is a place of reparation. Varadaraja is the giver of what Lakshmi Narayana asked for. If Sridevi – Bhudevi Samedara is worshiped, obstacles will be removed and marriage will happen soon.

Hasta Nakshatra to Lord Dhanwandri at Perumal temple here and offering herbal tilabishekam on Wednesdays and 11 times crawling with ghee lamp will give physical health.

People with Rahu Dosha worship the Five Headed Nagar with lamp on Friday during Rahu period.

Thus, if Shiva and Vishnu visit a wedding shrine with a temple next to each other, the forbidden marriage will soon take place.

It is said that if you have a good husband, you can live well in life

6 km from Kutthalam on Kumbakonam – Mayiladuthurai road. Come to the distant wedding.