Ayakkudi balagan that blesses you with child

Ayakkudi balagan that blesses you with child 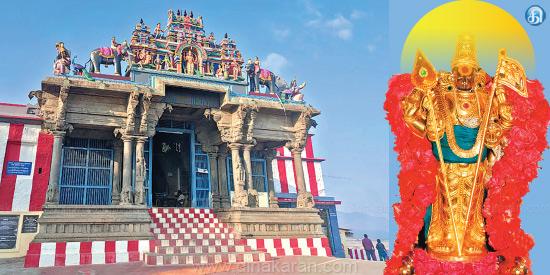 Ayakudi Balasubramania Swamy Temple is famous for chanting by Arunagirinath. In earlier times, when the pond at Mallapuram was cleared, the idol of Balasubramanya Swamy was found there. The idol is said to have been placed over the samadhi of one Siddhar, a devotee of Muruga, and later erected as a temple.

The front hall pillars of this temple have the idols of Rama, Sita and then Anjaneya carved on them. Balasubramaniar here was  Harirama Subramaniar as Rama devotees also started worshiping Murugan in this generation considering Saiva and Vainava unity. The meandering river here became the Hanuman river. On the basis of the fact that Ramapiran visited this place, pujas are performed in the Vaishnava way for Balasubramaniyar, the founder, and in Saiva way for the Utsavara Muthukumara Swami.

It is  that the five divine powers Shiva, Shakti, Surya, Vishnu and also Ganesha come from the five trees in this temple namely Govara, Neem, Mavilingam, Pomegranate and Karuvepila. Under those trees, place Balasubramaniaswamy in the form of a child on a peacock vehicle. The peacock will be with its head turning to the left. Utsava Murugan worships here in the form of Pacchilam Balakan as a one and a half foot high idol standing on a thirukolam, carrying Vajrayuta and then Shaktiwela in his two hands and wearing a shaft and salang on his feet.

It is the experience of the devotees that when those who wishing to have a child , come and worship at Ayakkudi balagan temple. The sound of the baby crying will soon be in their homes.

Those who have worshiped Balasubramanya Swamy and received the fulfillment of their prayers, offer payasam as offering and then pour it on the steps on the banks of the Hanuman river that flows near the temple.

It is that devotees and also children drink it. This is podavayasa nivedanam. Murugane came in the form of children and then offered Payasa Nivedana. Believing in acceptance.

On the sixth day of Shashti festival, they perform Surasamhara here like Tiruchendur.

Lord Muruga will come to Maidan and take blessings from Mother and Father in Kalakandeswarar Sannadi. Then the mother will bring vel from the temple to give vel to her brother-in-law Murugan.

It will be wonderful to see people disguised as Yaanimukhan, Singhamukhan and Soorapadman standing on one side and Veerabaku Devar with his retinue opposing them on the other side, Murugan and Suran people pretending to fight in the field.

Those dressed as Devas and also Asuras participate in this festival by fasting for six days.

Also they perform special worships every month on Karthikai, Shashti and then Fridays.

Then learn more about sleep apnea